F4 Academy: Hadrien David masters the game in the rain at Pau

Race 3 of the French F4 Championship in Pau was decided in the first lap, after the excellent start by Frenchman Hadrien David, who raced on his own on a wet track. 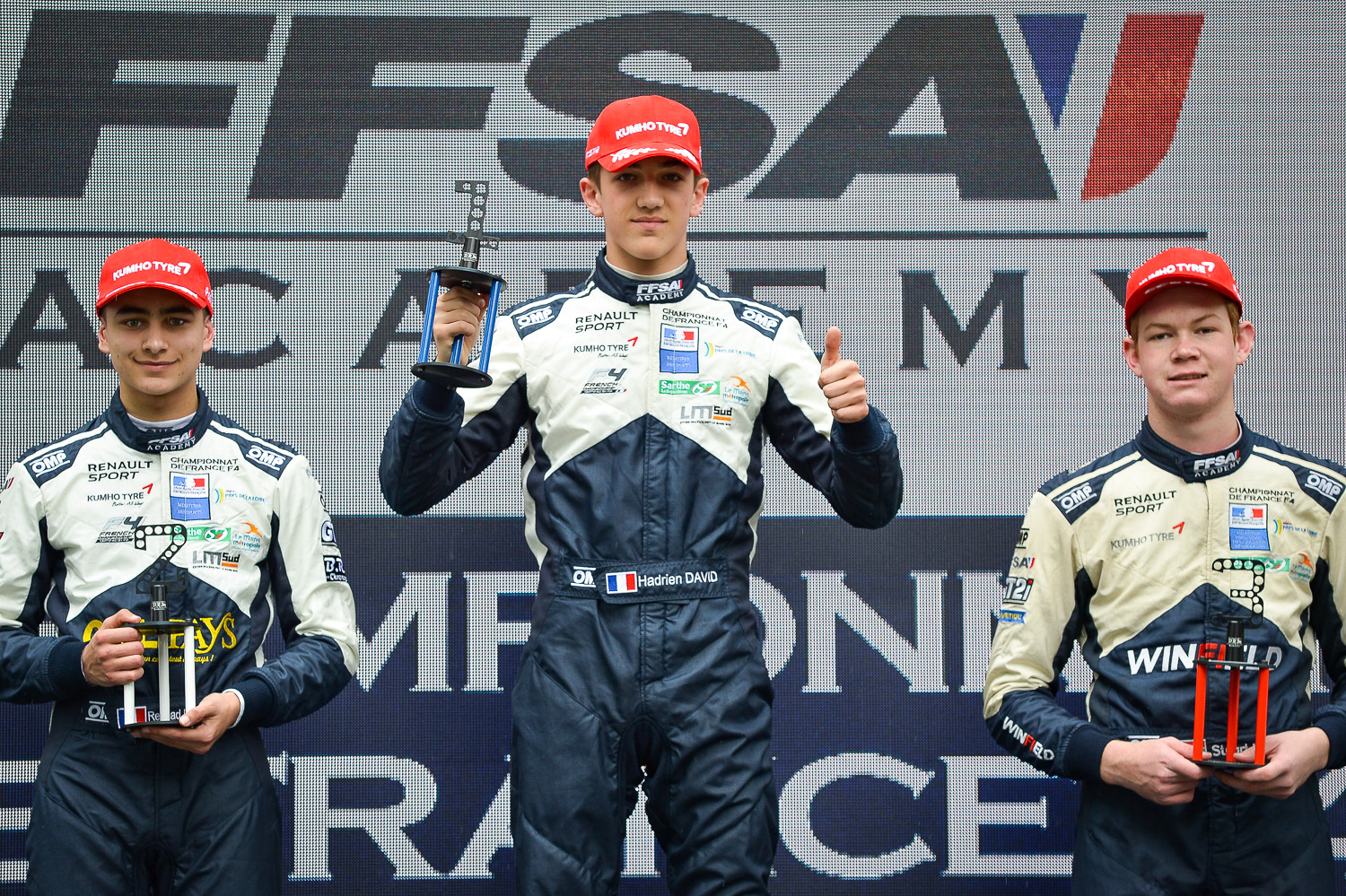 Starting from pole position, the South African Stuart White also lost out to Reunion Islander Reshad De Gerus, who picked up some points from the leader of the Championship Hadrien David. In the city of Pau, this very international series managed by the FFSA Academy has confirmed its extremely high standard of competition for young motorsport hopefuls.

The rain returns for Race 3

After having been able to compete in both races on Saturday in the dry, the 19 drivers entered in 2019 were faced with rain, which they have already had to contend with on Friday during the Qualifying session. “The cars were ready for the race and shod with slicks, when a downpour suddenly changed the track conditions,” commented Hadrien David. “The FFSA Academy team was quick to install rain tyres on our F4 cars, but I admit that it was a new challenge. It was the first time we had a start here on a wet track and we had to forget the markings of the day before. I was on the front row with Stuart White in pole position and I knew it would be very difficult to overtake him in the race if he got the best start. I really focused on not spinning the wheels and I managed to get into the lead after the first corner. Then I attacked to the maximum, while being careful to avoid mistakes. When I saw that I was well ahead, I was able to take care during the closing laps.” 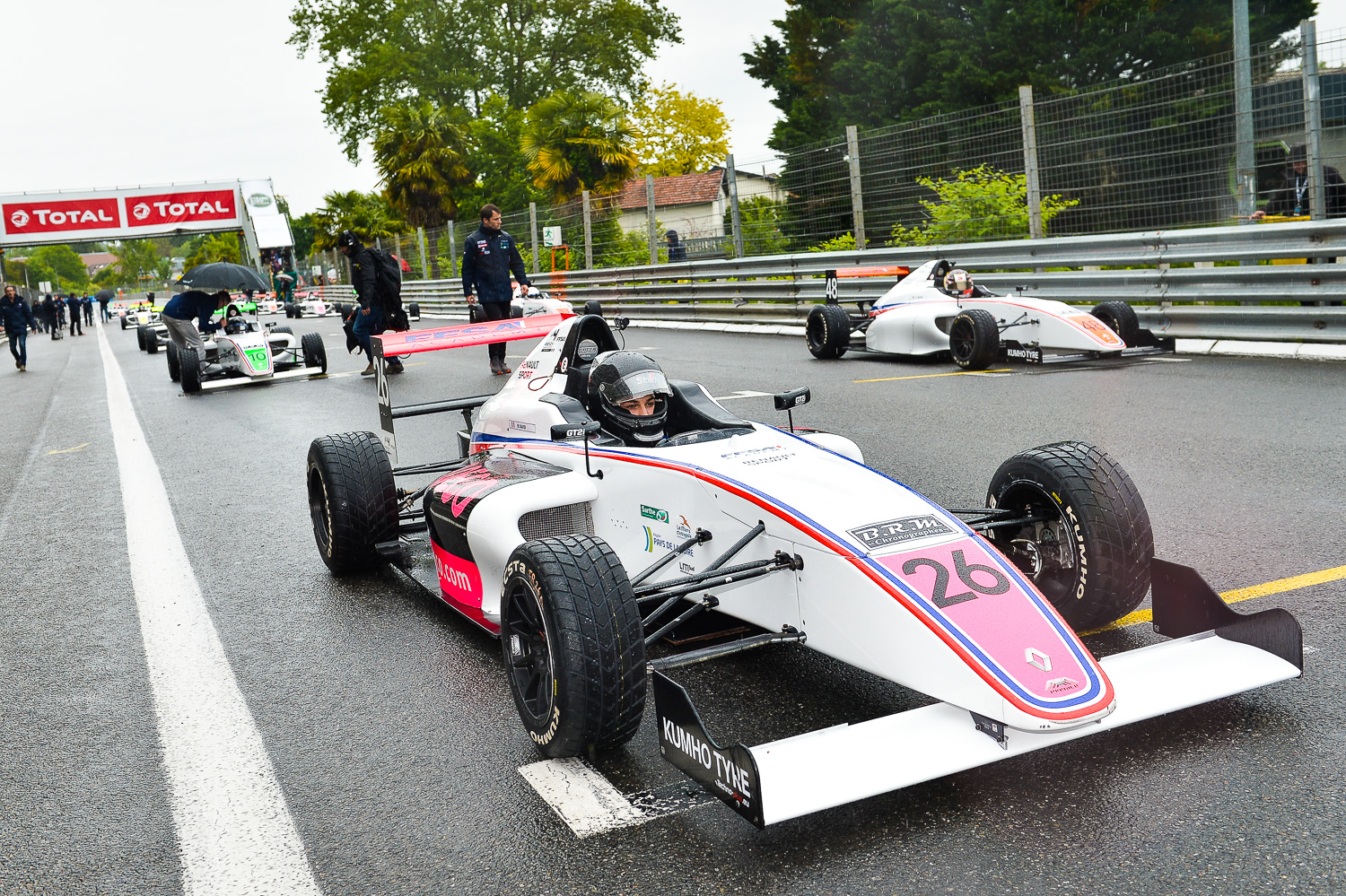 Head to head for 3rd to 5th places

Behind them, Reshad De Gerus managed to get the better of Stuart White early in the race. Although David managed to widen the gap early in the race, the young Reunion driver never stopped attacking, as evidenced by his fastest lap of the race at the very end. “I won Race 1, I scored important points in the next and I finished 2nd in Race 3. In the end, it was a good operation for me in the French F4 Championship,” said Reshad.

Behind, Enzo Valente was slightly faster than Stuart White, but could never take the advantage over the South African who completed the Sunday podium. Another fight took place for 5th place between Belgium’s Sten Van der Henst, who made a brilliant start from 11th position, and Jules Mettetal, winner of the Winfield Volant. During many laps, Mettetal put pressure on the Belgian to try to surprise his rival, but in vain. With this 5th place, Van der Henst took his best result since the start of the season.

Although Gillian Henrion finished 7th, Victor Bernier saved his tough weekend by winning in Junior. “It all started with a bad Qualifying on Friday. Then, I was involuntarily involved in the clash of Race 1, where I received a severe disadvantage. I had to take part in the following two races with a sprained wrist! In these conditions, I was rather satisfied with this 8th place and this new success in Junior, but it is obviously a long way from my goals this season. I hope that the next race at Spa Francorchamps in June will allow me to get closer to the front.”

Ugo Gazil and Valdemar Eriksen completed the top-10 of the day. On the other hand there was disappointment for Evan Spenle. Starting well and 4th on the first lap, he was baulked by another competitor and went off on the slippery track.

After two meetings, Isack Hadjar remains the leader of the Junior ranking ahead of Victor Bernier and Paul-Adrien Pallot.

Provisional ranking of the French F4 Championship after two meetings

Whatever the circuit, Iwasa continues to dominate the French F4 Championship. After […]

Starting 2nd in Race 1, Japanese Ayumu Iwasa got the better of […]

F4 Academy: A solid trio on the podium at Paul Ricard

On the Paul Ricard circuit, a wet track confronted the drivers of […]