F4 Academy: Hadjar the brilliant winner of a dramatic race

Starting from 6th place in Race 1, Isack Hadjar earned his first single-seater victory by defeating South African Stuart White and Victor Bernier at Spa Francorchamps. A magnificent performance for this driver, who is entered as a Junior!

This first race of the Belgian meeting, taking place in beautiful sunshine as part of the “Spa Euro Race”, was marked by the clash between the two leaders, the Frenchman Hadrien David and the American Nicky Hays, who had just regrouped after the safety car left the track. 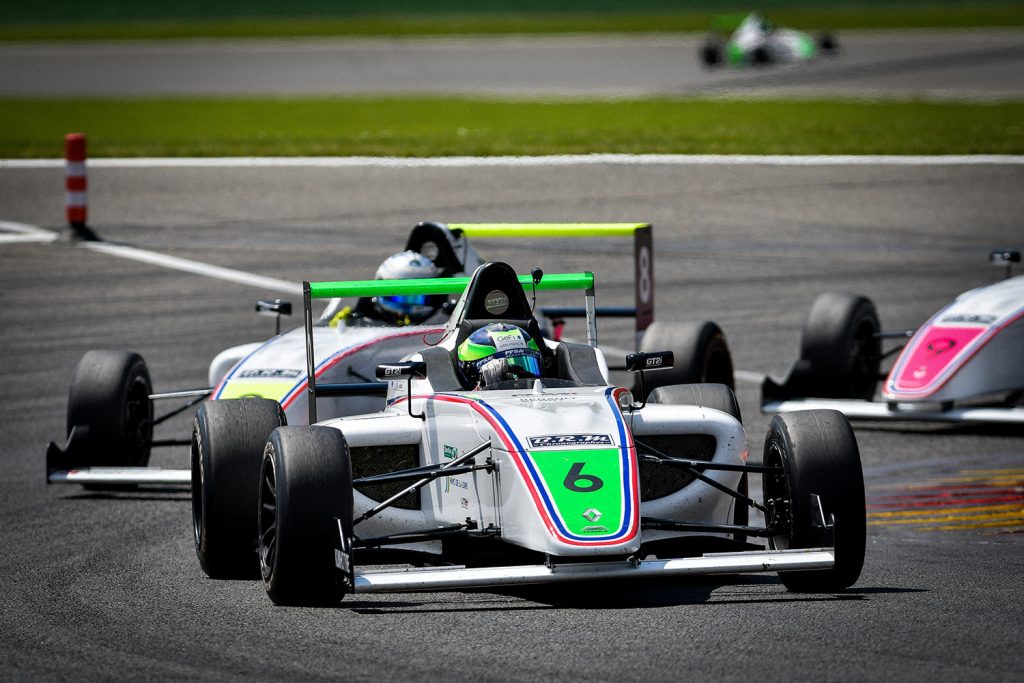 Victory for a Junior

Although Hadrien David started from pole, Nicky Hays pressed him at the start. The leader of the Championship quickly got the better of him and led the first lap. Quickly, David tried to widen the gap, to avoid the American taking advantage of his slipstream. While Stuart White was leading the chasing pack and the Junior duo of Victor Bernier and Isack Hadjar, a crash led to the safety car coming off on the third lap, allowing Hays catch David up.

Barely restarted, the intense duel between the two drivers ended in the braking zone of Les Combes. White took control of the race, before having to yield to Isack Hadjar, holder of the fastest lap in the race. “It’s great to win on this beautiful circuit,” said Isack when he got out of the car. “Still, I did not get off to a good start, as I was only 7th after the first corner. Fortunately, I managed to get a good draft out of the Raidillon, which allowed me to pass Van der Henst and Mettetal at once, while keeping in touch with the leaders. After the safety car episode, I took the lead over Victor Bernier, before taking advantage of the clash between David and Hays. I was impatient behind White, because I was definitely faster. I ended up finding the opening on the last lap.” Still just 14 years old, Isack Hadjar struck a double blow by also scoring maximum points in the F4 Junior Championship.

Behind Hadjar and White, another Junior had the honour of mounting the podium. After a more difficult start to the season than expected, Victor Bernier was able to raise his level of play to highlight on the Ardennes track. The 2018 World Karting Champion withstood the pressure from Belgium’s Sten Van der Henst, who spared no effort to shine at home.

At all levels of the peloton, wheel-to-wheel clashes fueled this Saturday race. Starting 10th, Evan Spenle achieved a convincing recovery in 5th position. Navigating the pitfalls and setting near-fastest times, Pierre-François Duriani was 6th, his best place since the start of the season. He was ahead of Ugo Gazil (+4) and Adrien Pallot (+6). Victim of an incident early in the race after a good start, Gillian Henrion dropped to the back of the pack, before regaining ten places to finish 9th ahead of the Dane Mikkel Grundtvig, who will have the honour of starting on pole position for Race 2 according to the principle of the inverted grid for the first 10.

The strongmen of the beginning of the season were definitely not at the party, as Reshad De Gerus had to be content with 13th place and Enzo Valente was forced to retire.