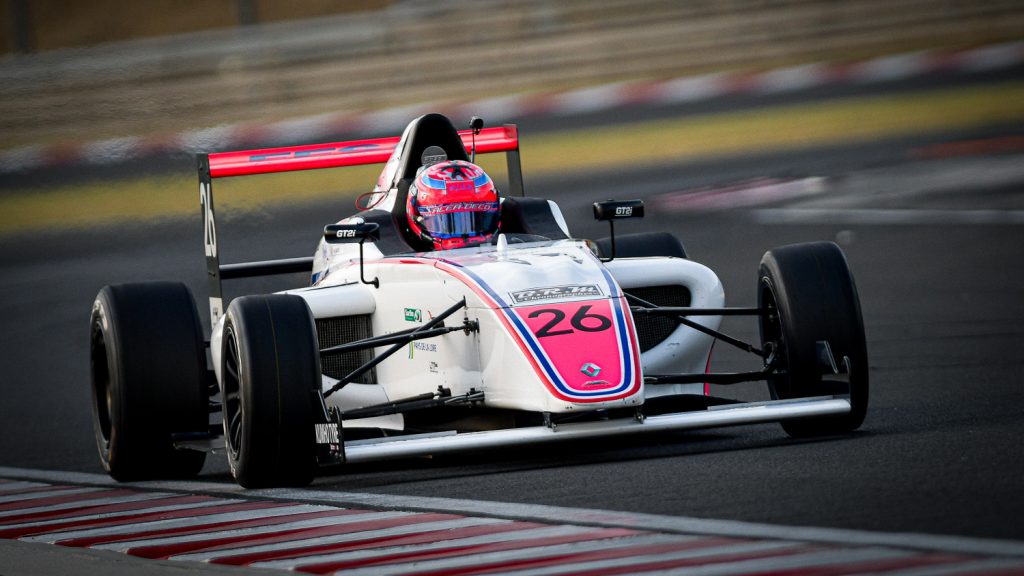 The French F4 Championship and the FFSA Academy have travelled to Hungary for the fifth event of this exciting season. In Budapest, the meeting began with another double pole position for Hadrien David, current leader of the championship.

Favourable weather and high temperatures joined the 20 drivers present for this event organised as part of the Blancpain GT World Challenge. Although they all made their mark on the famous Hungaroring during the Free Practice session in the morning, it was only during the Qualifying sessions that everyone unveiled their pace and their potential. Quickly rising to the top of the hierarchy, Hadrien David was never dislodged from 1st place. He improved his times over the session, to set his best lap of 1’51 “108 at his 11th attempt, just over two tenths ahead of his first pursuer.

“Despite appearances, this was probably my most difficult Qualifying session of the season,” said Hadrien. “In the morning Free Practice, we used Lédenon’s tyres and I only posted the 16th time, never feeling comfortable. It was not ideal to start with confidence this afternoon. Fortunately, I was able to fully exploit the new tyres and achieve a double pole thanks to my two fastest times. The Budapest circuit is rather twisty and it was really important to start at the front. After all, the weather is unpredictable for the weekend and many things can still happen. We will need to stay focused.”

Victor Bernier on the front row

Behind Hadrien David, Victor Bernier confirmed his rise in performance during the last two meetings. “The circuit is very technical and rather difficult, but overall it was a great session. I immediately managed to set a good pace and posted successive fast laps. Starting on the front row in Race 1 and in Race 3 is very exciting.“

On a circuit that the drivers were learning, the fight was intense for 3rd place, which finally went to Nicky Hays. The American headed Evan Spenle, back on form, and Reshad De Gerus. The difference between these last two did not exceed three hundredths. More consistent than his direct rivals, De Gerus will however have the opportunity to start in 3rd position for Race 3 because of an excellent second best time.

Despite an encouraging start to the session, Isack Hadjar was unable to improve his lap times as much as he would have liked and the leader of the Junior ranking had to be satisfied with the 6th fastest time ahead of Belgium’s Sten Van der Henst and the Winfield Volant holder Jules Mettetal. From the karting ranks and a newcomer to the discipline, the Russian Vladislav Lomko stood out by putting his Mygale-Renault F4-FIA in 9th position, only 7 thousandths ahead of Ugo Gazil who completes the top 10. Well placed in the provisional ranking of the French Championship, Gillian Henrion (11th) and Hugo Valente (12th) clearly hoped for better in this qualification. Three races are scheduled during the weekend and possible rain could change this initial hierarchy.

All the drivers and staff of the FFSA Academy have started this meeting with Anthoine Hubert in their thoughts, the sticker “Racing for Anthoine” featuring prominently on the single-seaters.