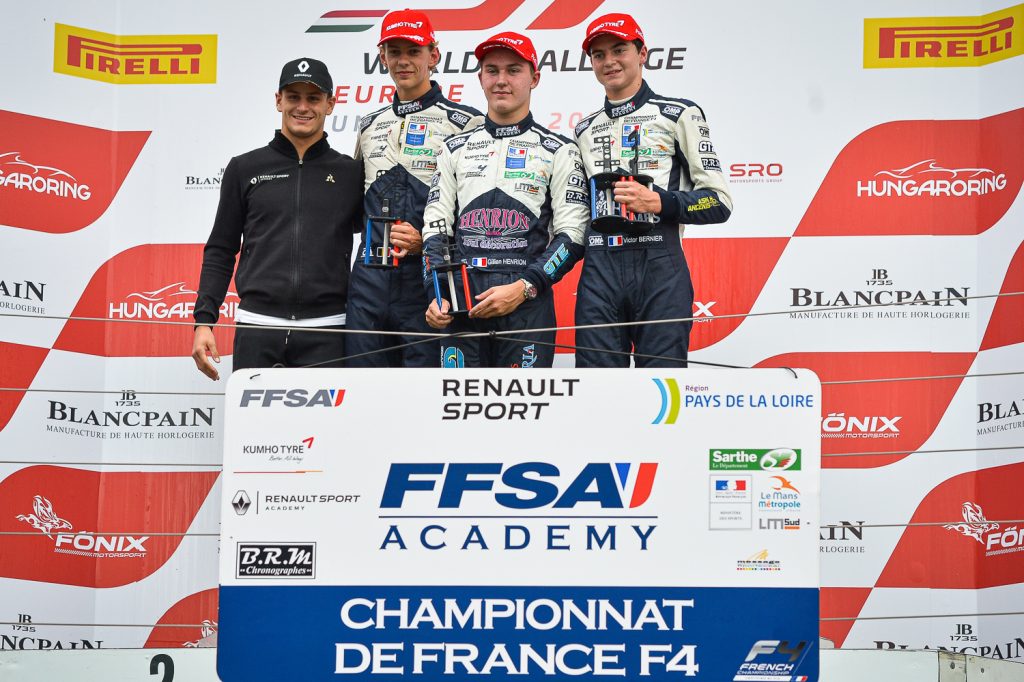 In Hungary, the weather played a significant role during the fifth round of the French F4 Championship. Hadrien David won in Race 1 before the rain started and Gillian Henrion won Race 2 on a partially dry track.

On Saturday, 7th September at the Hungaroring, the heat and the sun of Friday gave way to much more capricious weather. Although the drivers were able to start on slicks for Race 1 behind poleman Hadrien David, the rain soon made its appearance. Faster than Victor Bernier, the American Nicky Hays settled in 2nd position. The safety car came out for the first time when the young Russian driver Vladislav Lomko went off the track, following contact with another driver. In the incident, Isack Hadjar dropped to the back of the pack. At the restart, David contained Hays and escaped thanks to his steady pace, while Bernier dropped one more place after an impressive attack by Reshad De Gerus.

Points divided in half

Quickly, the rain began to increase, forcing the Race Director to wave the red flag after lap 5. Ugo Gazil had been able to take advantage of the difficult conditions to gain four places and return to 6th position just behind Evan Spenle. The classification was confirmed. Hadrien David won for the fifth time this season in front of Nicky Hays, Reshad De Gerus and Victor Bernier, the top junior. However, the winner showed only measured joy, with only half of the points being distributed because of the distance covered.

The torrents of rain that fell on the Budapest area caused fears for the second race of the French F4 Championship. Fortunately, the sky cleared and the Hungaroring track dried up. Slick tyres were installed on the FFSA Academy’s single-seaters despite a track that was still wet in some places. With a reverse order start for the top 10 of Race 1, this new encounter was to be very exciting to watch, especially in the chasing pack.

Placed in 2nd position on the starting grid, Gillian Henrion was to experience the perfect race. “I was looking forward to this first F4 win and I’m really happy to get it in these difficult conditions after I became the lone driver leading the race. I made a great start by making the most of the grip of the tarmac before tackling the first braking point. The first laps allowed me to build a big gap and then I aimed to manage the tyres to the maximum. Sten Van der Henst took the opportunity to come back a little later on, but I increased the pace again to ensure the win.”

Behind Gillian Henrion and Belgium’s Sten Van der Henst, who also produced a magnificent performance, the positions changed frequently. While Victor Bernier, Ugo Gazil, Evan Spenle and Reshad De Gerus were not going to give anything away in the chasing pack, and likewise the duel between Nick Hays and Enzo Valente, Hadrien David embarked on a courageous comeback. The tension rose over the laps, with some exhilarating elbow-to-elbow battles. This group split in half at the halfway point following a puncture suffered
by David, forced to retire a little later.