F4 Academy: De Gerus on pole after a busy session 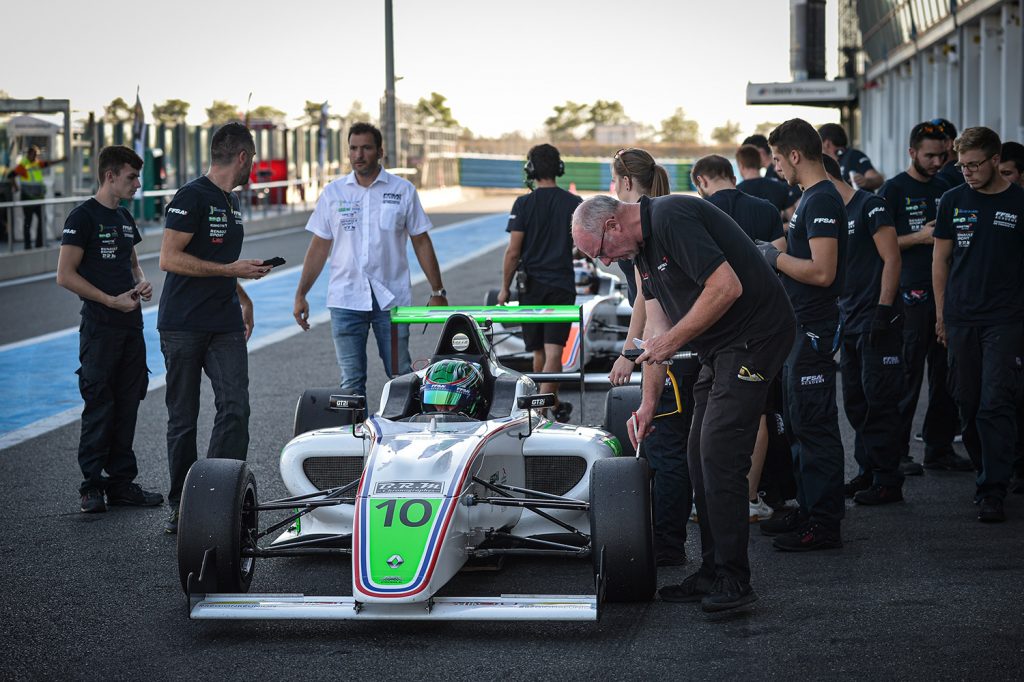 At Magny-Cours, the drivers in the French F4 Championship took part in a Qualifying session where pole position changed hands several times. The very fast Reshad De Gerus had the last word against Hadrien David and Jules Mettetal.

In ideal almost summer weather, the sixth of the seven events counting for the FFSA Academy French F4 Championship started with excitement. Friday started with an exciting Free Practice session, in which the top two in the overall standings went head to head. The Reunion driver Reshad De Gerus managed to take a very slight advantage of just a tenth. This forecast an exciting Qualifying session, which was quickly confirmed…

In the late afternoon, several drivers took advantage of the beginning of the session to get themselves noticed, but soon Reshad De Gerus and Hadrien David settled at the top of the hierarchy. However, their opponents did not give up. The American Nicky Hays emerged after a few seconds in the lead, followed by Jules Mettetal, then by the Belgian Sten Van der Henst. Shortly before the middle of the session, between the 5th and 7th lap, the fastest laps were appearing one after the other. At a very fast pace, De Gerus made perfect use of this window to set three impressive Qualifying laps consecutively.

“I really like the Magny-Cours circuit, it’s great to drive this kind of track, more than 4km long to F1 standards,” said Reshad. “Here, there are areas where it is really possible to make a difference. Taking pole position with a gap of more than 4 tenths is ideal to start with confidence for the three races of the meeting. In addition, thanks to the times that I managed to set quite early in the session, I was able to stop before my rivals and save my tyres a little. In the Championship, Hadrien David increased his lead in Hungary, so it is imperative that I win again if I want to get back.”

Behind the Reunion driver, four contenders found themselves grouped in only three tenths! Winfield Volant winner Jules Mettetal was looking for a front-row spot in Race 1, but confessed to a small mistake. “I had the fastest time in the first sector, but then I missed a breaking point and lost a few tenths. However, this is an event where I hoped to rejoin the top three, so it is still positive to start at the front.”

For his part, Hadrien David will be in 2nd position, both on Saturday morning in Race 1 and Sunday morning in Race 3. With almost 20 points in hand, the current leader of the Championship must above all increase his points total and leave the risks to his opponents.

4th at just three thousandths from Jules Mettetal, Nicky Hays knows he will have a great card to play in Race 1, as does his immediate opponent Gillian Henrion. With full confidence after his first win in Budapest, he also had a brilliant 2nd best time, which will allow him to start in 3rd position in Race 3. Sten Van der Henst (6th and 5th) did not deserve. Still neck and neck as so often this season, Victor Bernier and Isack Hadjar gave everything, frequently among the leaders during this session. The two Juniors are 7th and 8th on the starting grid for Race 1, and even 4th for Race 3 for Bernier.

Ugo Gazil twice won his place in the top 10, as did the Japanese Kakunoshin Ota, the leader of the Japanese F4 Championship and present in a partnership with the Suzuka circuit and the FFSA Academy. Although Evan Spenle (11th and 13th) regretted having seen his best time cancelled for exceeding the limits of the track, Mathis Poulet (12th and 11th) found a more significant position after his disappointment of Hungary the week before.

Estimated timetable of the weekend