F4 Academy: Japanese domination and duel for the podium 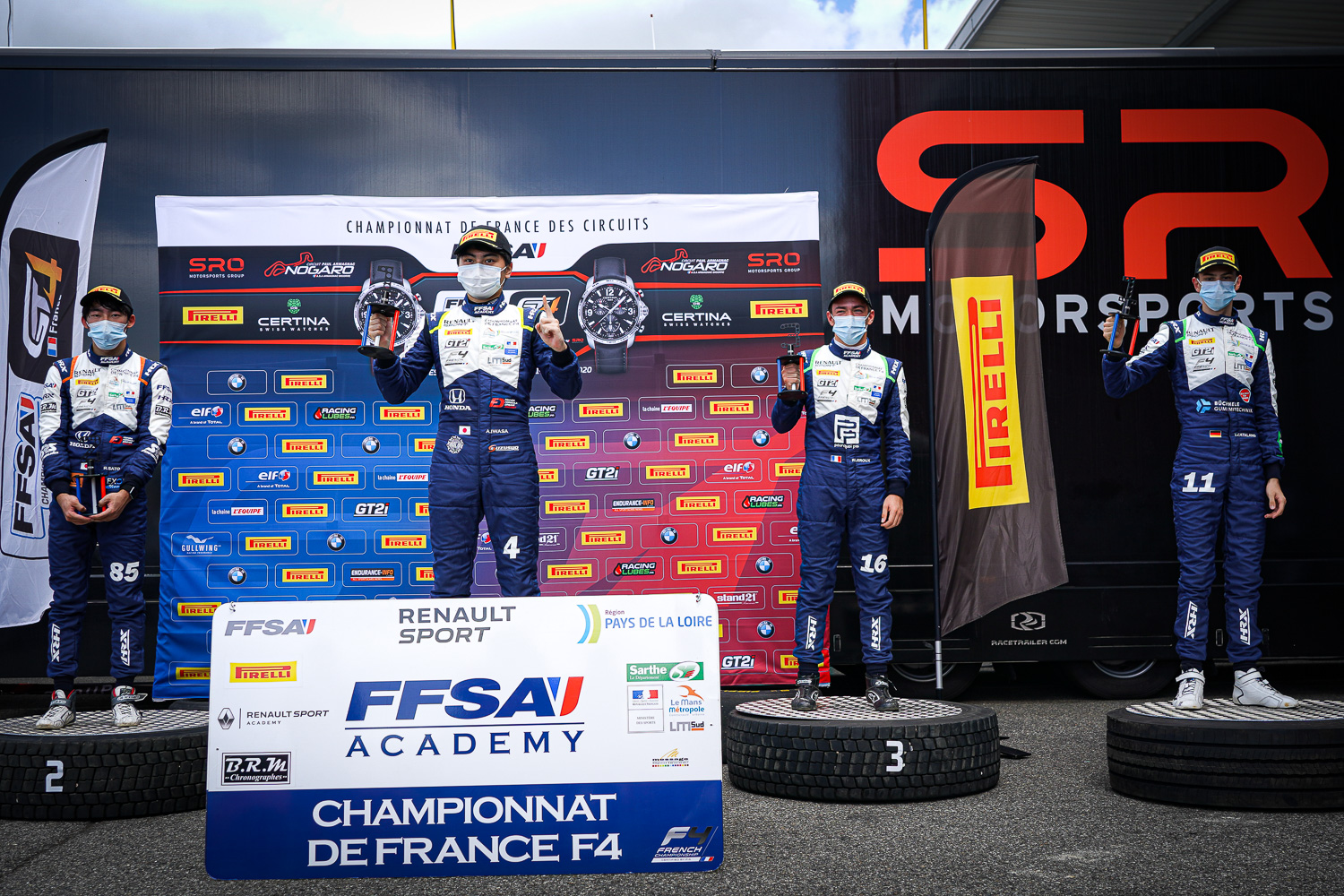 Iwasa confirmed his double pole and Saturday’s success by staying ahead in Race 3. While Sato secured another podium in this first round of the French F4 Championship at Nogaro, Leroux came out on top in a superb duel for 3rd place on the podium.

The first meeting of the FFSA Academy French F4 Championship was eagerly awaited, firstly to see the excellent vintage of 2020 drivers in action, and also the performance of the Mygale single-seater, now lighter and equipped with the Renault Sport Turbo TCe engine, as well as Pirelli tyres, a brand that has been present in Formula 1 for 10 years. This new package has enabled the drivers to gain more than three and a half seconds per lap at Nogaro compared to the 2019 Easter Cup. In the Gers region, the Japanese drivers Iwasa and Sato took advantage of the opportunity to take the lead on the track and in the Championship…

Hadjar unlucky, Iwasa does the double

Isack Hadjar, who started on the outside front row following his performance in the Qualifying session, was hoping to worry the poleman Ayumu Iwasa in Race 3, or at least to celebrate a second podium after Saturday’s race. Unfortunately for the young Frenchman, his single-seater quickly showed some signs of weakness and he ended up retiring on lap 5. From then on, it was Ren Sato who took the lead over his compatriot Ayumu Iwasa. The two Japanese drivers set an incredible pace at the front of the field and built up a substantial gap over the chasing pack. Iwasa kept control of his rival throughout the race and was the fastest on the podium. Ayumu and Ren, who have chosen to move to France this year to better integrate into the FFSA Academy, find themselves 1st and 2nd in the provisional standings of the FIA-certified French F4 Championship.

In this Sunday’s race, the spectacle came from behind, with fierce battles for the places of honour and in particular for the last step of the podium. First Loris Cabirou made a mistake on the first lap of the race and fell to the back of the pack. 4th at the beginning of the race, then 3rd after Hadjar’s withdrawal, Dutch driver Marijn Kremers held on to the lead of this animated group for a long time.

Unlucky in Race 1, and therefore penalised by a back of the grid start in Race 2, Romain Leroux was eager to show his talent. Starting in 8th place, he dealt with the Mexican Rafael Villagomez, before winning his duel with Sami Meguetounif. Leroux would then put a lot of pressure on Kremers, the 2019 World Karting Champion and winner of this winter’s Volant Feed Racing.

He finally found the opening with three laps to go to the finish to move up to 3rd position. Meguetounif tried a manoeuvre to take advantage of the situation, but touched Kremers slightly, which sent his car into the barriers of the Nogaro circuit!

Rafael Villagomez recovered 5th place, himself having been busy watching the progress of the Ukrainian Ivan Peklin and the two Juniors of the season in his rear-view mirrors: the German Valentino Catalano and Daniel Ligier, who showed his progress by finishing in the wake of his rival. Owen Tangavelou and the Reunion driver Noah Andy, winner of a tough duel with the Russian Lev Lomko, had the satisfaction of finishing in the top ten and to score their first points of the 2020 season, which has started on a high note…