In the wake of Pierre Gasly, the FFSA scheme is on the upswing

For Pierre Gasly, as for French motorsport, 6th September 2020 will remain a date as important as it is happy. With his extraordinary victory at the Monza Grand Prix, Pierre put an end to a very long interval of 24 years without a French driver on the top step of a Formula 1 podium. 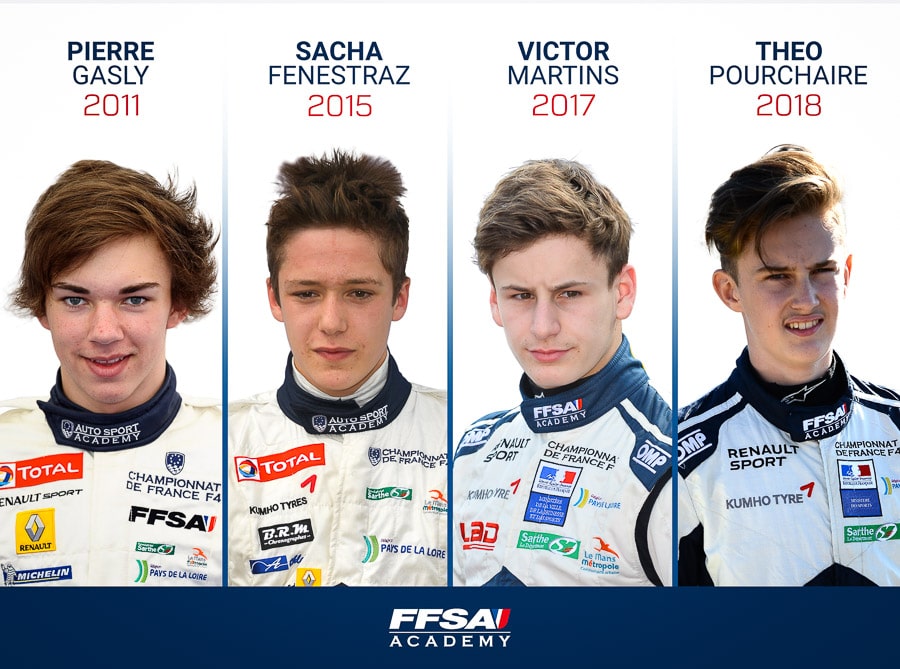 This resounding achievement is a perfect illustration of the effectiveness of the training and values taught by the FFSA Academy, whose talent detection role effectively contributes to the emergence of new talent. While the Marseillaise resounded on the Monza circuit, Théo Pourchaire mounted the podium of the FIA F3 Championship and Victor Martins won two more Formula Renault Eurocup victories at the Nürburgring.

“Pierre is part of the FFSA Academy family and we are very proud of him,” said Christophe Lollier, National Technical Director. “The FFSA has supported him from a very young age, first in the 10-15 Programme and then in the French Karting Team. He made his single-seater debut with us in the French F4 Championship in 2011 before joining the Equipe de France FFSA Circuit. In addition to his talent, his determination and perseverance are an example for young people who aspire to success in motorsport. The FFSA is once again demonstrating the value of its excellence. Despite the death of Anthoine Hubert, the next generation of drivers is on the move, including three French drivers who are currently achieving very good performances.”

Indeed, Sacha Fenestraz, Théo Pourchaire and Victor Martins are also shining in different parts of the world with one thing in common, progression through the FFSA Academy.

French F4 Vice-Champion in 2015, Sacha Fenestraz moved to Japan to win the F3 Championship last year. In 2020, he has accumulated successes in a double programme in Super Formula, the category in which Pierre Gasly had been waiting for his place in F1, and in the GT500 championship.

Two other young French drivers from the FFSA have also shone in single-seaters after their exploits in karting. Théo Pourchaire and Victor Martins regularly attend the FFSA Academy, especially since this is where they continue their education while honing their winning physical and mental skills.

At Monza, Théo Pourchaire secured his first pole position in the FIA F3 Championship before slipping off the track. 9th on the grid, falling to 17th place at the start of the race, Théo then climbed back up to 4th place. Although he is a rookie, he has seven podiums and two wins this season with the ART Grand Prix team and is 3rd in the standings before the final race.

In Formula Renault Eurocup, Victor Martins made sparks fly at the Nürburgring. He started by taking his 12th and 13th pole positions of the season, a record, and scored two victories with the fastest lap in each race. With 10 wins to date, another record, Victor leads the provisional Eurocup standings.

The FFSA Academy is a breeding ground for future champions and is the centerpiece of the FFSA’s Filière d’Excellence. The federal centre, which is running at full capacity, is involved in karting, single-seaters and rallying, while also training young racing mechanics. It is also the object of admiration and envy in many countries.