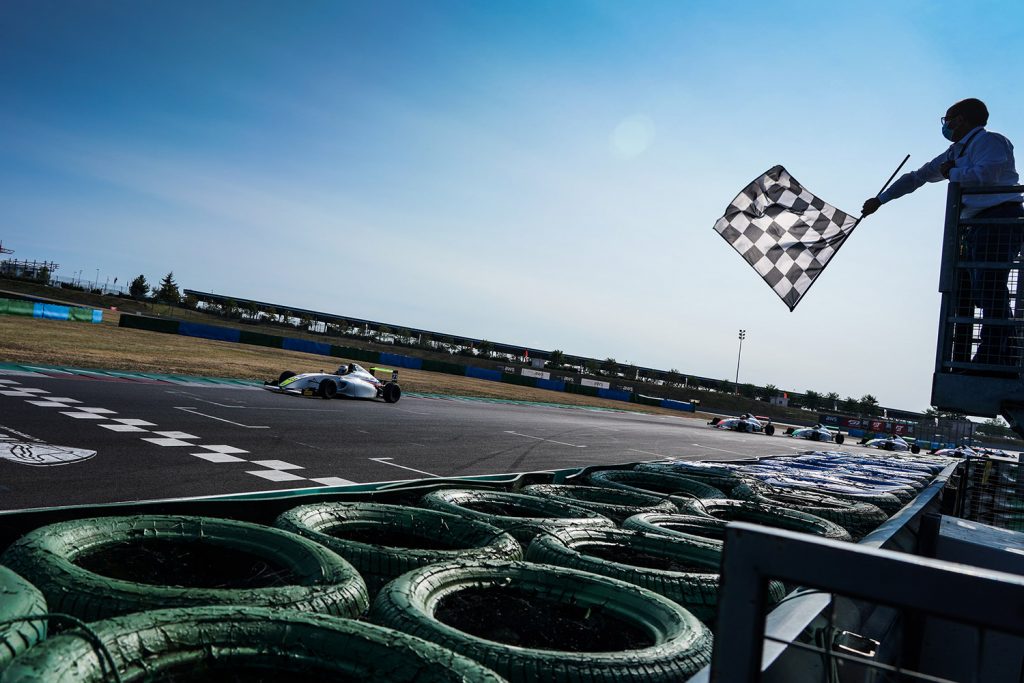 Races 1 and 2 of the French F4 Championship took an active part in the GT World Challenge meeting at Magny-Cours, with incessant duels for the podium. Japanese driver Sato triumphed in the morning, before Ukrainian driver Peklin won in his turn in the afternoon.

As could have been expected from the very tough Qualifying session on Friday afternoon, the first two races confirmed the extremely small gaps between the young drivers of the 2020 vintage of the FFSA Academy. There was maximum suspense on both occasions, with a ranking that could change at any moment in the very tight fields. The Mygale F4-FIA chassis package + Renault Sport turbo engine + Pirelli tyres showed both its educational side and its sporting interest, produced by the continuing internationalisation of the French Championship.

On Saturday, 12th September, a little before 9 o’clock in the morning, the start was given to Ren Sato but Sami Meguetounif immediately took control from the Japanese driver, with Ayumu Iwasa stuck to his wing. The first incident involved Romain Leroux and Rafael Villagomez. Both the Frenchman and the Mexican were able to rejoin the race, but they lost some valuable positions. Isack Hadjar quickly chased down Iwasa and managed to take the advantage with a superb attack.

Very fast since the beginning of the meeting on the Nivernais circuit, Meguetounif maintained a high rhythm to stay in the lead, but Sato responded with lap times that got better and better with each lap. The Japanese driver finally set the fastest lap with 1’40″030 and increased the gap to win for the first time on French soil! Sami Meguetounif took 2nd place in front of Hadjar, who had to keep an eye on Iwasa, the double winner at Nogaro in August.

Dutch driver Marijn Kremers won his duel for 5th place with German driver Valentino Catalano, who took another victory in the Junior category. Loris Cabirou was 7th in front of Romain Leroux. A final crash between the Russian Lev Lomko and Rafael Villagomez left the Mexican on the sidelines for good.

Race 2: Ivan Peklin resists the pressure until the end

A lot happened in this race on Saturday afternoon, with a start given in reverse order for the top 10 drivers of Race 1. Back in 10th position in the morning, Owen Tangavelou started perfectly from pole position and finished the first lap in the lead despite the pressure from Ivan Peklin. A little bit later at the Lycée corner the Ukrainian found the opening. Romain Leroux was in ambush and tried to get inside before the chicane, but the two cars touched each other at this narrow spot. The unfortunate Tangavelou spun and was forced to retire. Behind the new leader, Loris Cabirou took 2nd place just ahead of Leroux, with the safety car on the track for a few minutes after the incident.

Peklin remained perfectly calm and managed a perfect restart. The intensity of the race increased a little bit more with a lot of action in the pack. The constant attacks and late braking put the tyres to the test, leading to several gaps. There was a magnificent battle between Leroux, Meguetounif, who had started very well, and Iwasa, as well as between Marijn Kremers and Valentino Catalano.

Under the chequered flag, Peklin held off Cabirou and Leroux. Iwasa won his duel with Meguetounif, but the positions were reversed after an investigation by the stewards, the Japanese driver having short-circuited a chicane. Sato had to be satisfied with 6th place ahead of Catalano, again the winner in the Junior category, and he also managed to pass Kremers. Behind Isack Hadjar, who had a very eventful race, Rafael Villagomez completed the top 10.