After a suspenseful Qualifying session on a dry track, Dutch driver Kremers started Race 1 on pole at home in the French F4 Championship (3/7) at Zandvoort. But it was all decided at the start, to the advantage of the Japanese driver Iwasa. 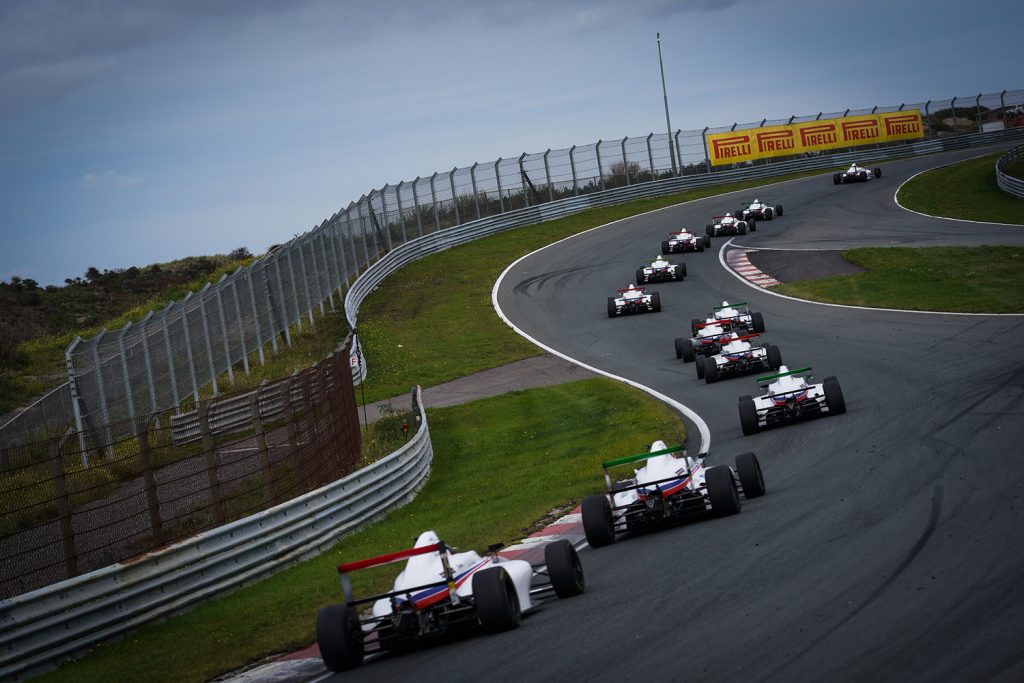 For the very first time, the FFSA Academy French F4 Championship moved to the Zandvoort circuit in the Netherlands. On this occasion, the very international line-up of this competition joined the GT World Challenge again, three races on the programme as for every F4 meeting. For once, Friday was only a Free Practice session, led by Romain Leroux, and it was not until Saturday morning that the Qualifying session took place.

Kremers makes the difference at the end of the session

Very wet after an early morning shower, the track gradually dried out during the 25 minutes the stopwatch was on. These tricky conditions put the drivers to the test, especially with no less than three red flags after the successive, but not serious, crashes of Daniel Ligier, Noah Andy and Sami Meguetounif. It was at the last restart that everything was decided. For a long time the leader and particularly strong at Zandvoort, Dutch driver Marijn Kremers was first put under pressure by Loris Cabirou, Mexican Rafael Villagomez and then German Valentino Catalano.

A little bit later, it was the turn of the two Japanese drivers Ayumu Iwasa and Ren Sato to take over the lead from Kremers. The latter recovered the leadership just before the last neutralisation. In the last minutes, Iwasa took provisional pole position, before being overtaken by Isack Hadjar. Among the first to take the lead, the Dutch World Kart Champion managed to complete a lap more than his main rivals and drove a perfect lap to set the absolute fastest time. “The lines dried out as the laps went by and I suspected that pole would be decided in the last seconds. That proved to be the case and I am very satisfied with the lap times at this important moment,” commented Kremers. Hadjar was finally 2nd in front of Iwasa. The Ukrainian driver Ivan Peklin was in 4th position at the end of the session, ahead of Sato and Catalano, the top Junior.

The best 2nd lap went to Kremers, who will also start on pole in Race 3 on Sunday afternoon in front of Peklin, Catalano, Iwasa and Sato.

The start was the key to Race 1 on Saturday afternoon. Kremers missed the start slightly and Hadjar was in front of him at the first braking point. Even better, Iwasa tried the outside of the famous Tarzan corner and, thanks to a better exit speed, passed both of his rivals in one go. A masterstroke for the Japanese driver! Hadjar put a wheel past the leader, but was a little bit scared when he oversteered a little further. Kremers immediately took advantage, followed by Sato. The lead quartet was then set. Iwasa showed himself to be strong, never giving Kremers a single opportunity. “I managed to keep a high pace for the whole race, but at the same time I was careful because you can quickly start to make mistakes on this very fast track. For me it is good for the championship after my two victories at Nogaro,” admitted the winner. Behind the top two, Hadjar tried several times to get back on the podium in front of Sato, in particular on the last lap in a breathless neck and neck battle, but in vain!

Although the Mexican Rafael Villagomez quickly isolated himself in 5th position, some excellent duels took place in his wake. Peklin unfortunately crashed in 9th position, passed successively by Catalano, the Junior winner, Cabirou and Meguetounif. Ranked 10th in front of Russian driver Lev Lomko and Noah Andy, Romain Leroux will start Race 2 on Sunday morning on pole position according to the inverted grid for the top 10 drivers. There was disappointment for Daniel Ligier and Owen Tangavelou, who were eliminated at the banking at the beginning of the race after a crash.