Whatever the circuit, Iwasa continues to dominate the French F4 Championship. After his two new successes at Spa-Francorchamps, the Japanese driver clearly appears to be a solid candidate for the title, despite the performances of Meguetounif, Sato and Hadjar. 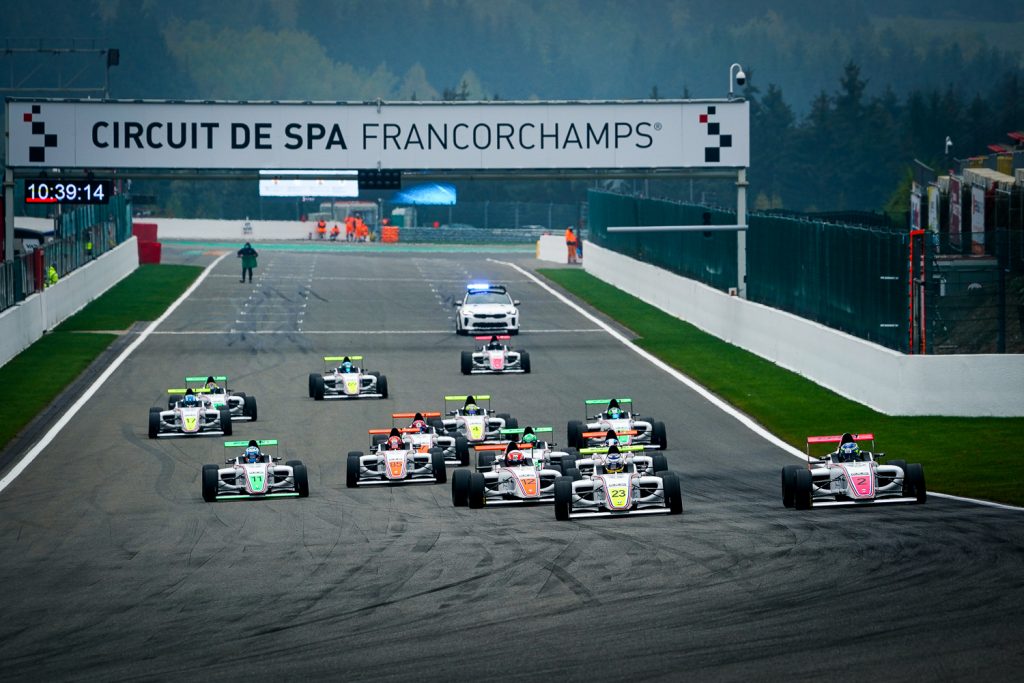 As could be expected, racing at the circuit of Spa-Francorchamps in Belgium was particularly hotly contested, thanks to the unique Ardennes track, the slipstream from the Les Combes straight and the relatively mild weather conditions. In the end, the Japanese remained in control of the situation. After the victory from Ayumu Iwasa in Race 1 on Saturday, his compatriot Ren Sato took the win in Race 2 on Sunday morning, before Iwasa won again in the afternoon.

As usual, Race 2 was full of uncertainties and twists and turns. Starting on pole ahead of Dutch driver Marijn Kremers after Race 1, Ukrainian driver Ivan Peklin was hoping to get back on the podium, before the hazards of the race changed the hierarchy completely. The Mexican Rafael Villagomez took the lead in the first lap, ahead of the Japanese Ren Sato and Loris Cabirou. This top three was to hold on for several minutes, before the Japanese offensive. On the fifth lap, Sato took over the lead of the pack, whereas Iwasa was in 2nd position in front of Cabirou and Villagomez, who made a bad move, losing three places in one go.

In this very compact field, Romain Leroux took his chance and took 3rd place behind the two Japanese drivers and in front of the German Valentino Catalano. After starting in 9th position, Sami Meguetounif came back to the battle for the podium, whereas Sato and Iwasa pulled away. The latter weren’t worried anymore, and Sato took his fourth victory of the season in front of Iwasa. Behind them, it was all decided on the last lap. Meguetounif made the end of the race count to move from 5th to 3rd place. Leroux made a mistake and had to settle for 8th place. Villagomez retained a convincing 4th place ahead of Cabirou and Catalano, winner again in the junior category. Noah Andy scored his best result of the season by crossing the finish line in 7th position. But Peklin, Kremers and Hadjar had no success et were disappointed after this race.

Iwasa dominant, another podium for Meguetounif

The duels resumed in Race 3 on the spectacular Spa-Francorchamps track, with the talent of the frontrunners confirming the high standard of the FIA French F4 Championship. With a magnificent start to the race, Meguetounif managed to keep the two experienced Japanese drivers Iwasa and Sato at bay. Determined to win, the Frenchman had to deal with a few raindrops, which changed the grip on some parts of the circuit. In these conditions, Iwasa tried his luck and got the better of the Frenchman. Iwasa held on until the finish and took his eighth victory of the season in front of Meguetounif. This made him the clear favourite for the title.

Isack Hadjar, who is used to crazy recoveries, was once again very strong in the pack, moving up from 14th to 4th place behind Sato. This brilliant performance was important for Isack in the Championship, where he remains solidly in 3rd place ahead of Meguetounif and Catalano. The latter took another place of honour in Spa by finishing 5th in front of Kremers. Some magnificent neck and neck races took place in the chasing pack, with Cabirou managing to keep 7th place in front of the Russian Lev Lomko, who moved up two places, Villagomez, who crashed at the beginning of the race, and Owen Tangavelou, who saved a point after a difficult weekend.