The local driver who lives in Marseille, less than an hour from the Paul Ricard circuit, celebrated his first victory in the French F4 Championship. Starting in 3rd place, Sami Meguetounif quickly took the lead to win Race 2 with brio against Leroux and Hadjar. 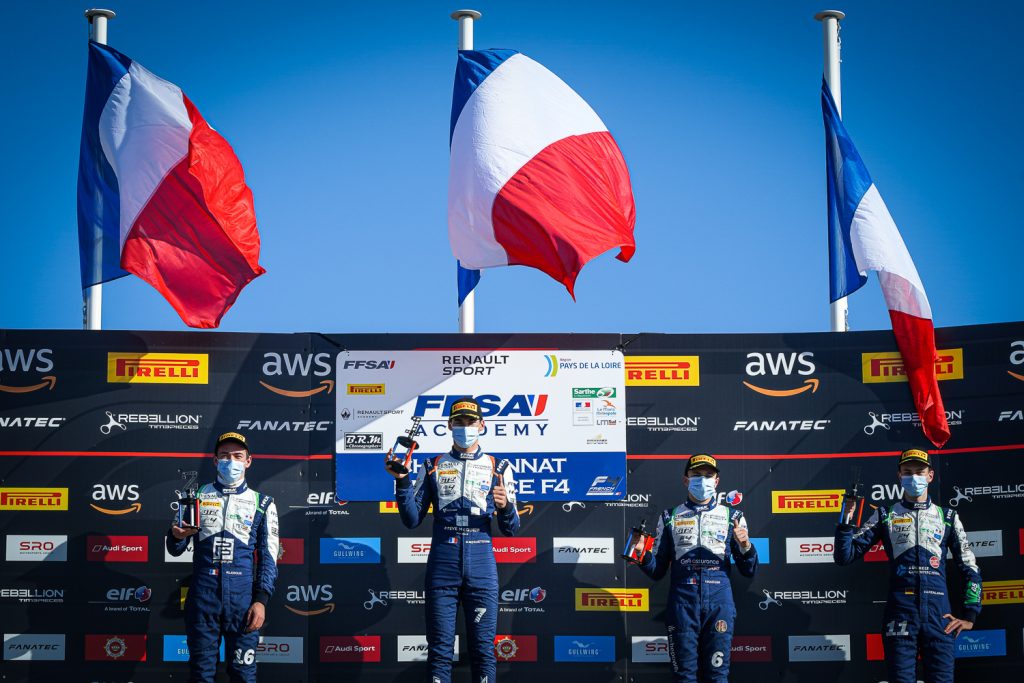 Under the magnificent blue skies of Provence and mild autumn temperatures, Race 2 produced many surprises. Several drivers decided to put on their two “joker” tyres allocated during the season, adding more interest to the competition.

Ranked 10th the day before, Daniel Ligier started on pole position (inverted grid for the top 10 in Race 1), but was immediately overtaken by Ukrainian driver Ivan Peklin, who took the lead on the first lap. Ligier was pressed by the pack and then had to give way to Sami Meguetounif, Romain Leroux and Marijn Kremers. Meguetounif continued on his way and passed Peklin to take the lead.

Often making energetic comebacks this season, Isack Hadjar didn’t remain inactive after his 10th place at the start. Starting very well, the French hopeful took five places in the opening laps and attacked for the podium. During this time, Ayumu Iwasa gained a position in front of Daniel Ligier, who fell to the back of the pack after contact with the Japanese driver. Owen Tangavelou was 11th after a difficult beginning to the race, but he tried to recover the lost positions and managed to overtake Loris Cabirou.

In ambush behind Peklin and Ren Sato in the middle of the race, Hadjar made a magnificent pass, taking both of his opponents in one go. The winner of Race 1 was now chasing the fast Romain Leroux, who was busy pressing the leader Sami Meguetounif.

In the pack, there was a regroupement between Iwasa, Kremers, Catalano and Tangavelou, with several intimidating manoeuvres between the four drivers. Peklin was still losing ground after going on the run-off outside the Paul Ricard circuit, where he was in a precarious situation with his single-seater.

Disappointed to have missed the podium in Race 1, Meguetounif was this time perfect and deprived Leroux of any chance to overtake. Hadjar, who had set the fastest lap in the race, reduced the gap to Leroux, but he wasn’t able to attack. The classification didn’t change any more until the finish line. A solid fourth, Sato scored important points in the championship.

Despite a damaged front wing, Iwasa kept his 5th place under the chequered flag. Kremers, who was penalised for leaving the limits of the track, dropped from 6th to 7th place ahead of Tangavelou. Finally 6th, German Valentino Catalano took advantage of the situation to take another victory in the Junior Championship, as he did the day before. Cabirou suffered the same sanction as Kremers and had to be satisfied with 10th place behind Peklin. Further back, Russian driver Lev Lomko had to work hard until the end to hold off a strong Noah Andy in front of Daniel Ligier, who was unlucky in this race.

Race 3 of this sixth meeting of the season will take place on Sunday at 8:10.