A few hours before the end of the 2020 French F4 Championship, Loris Cabirou put his name on the list of winners of the series by winning Race 2. In Race 1, Isack Hadjar scored another success by resisting Ayumu Iwasa to the end. 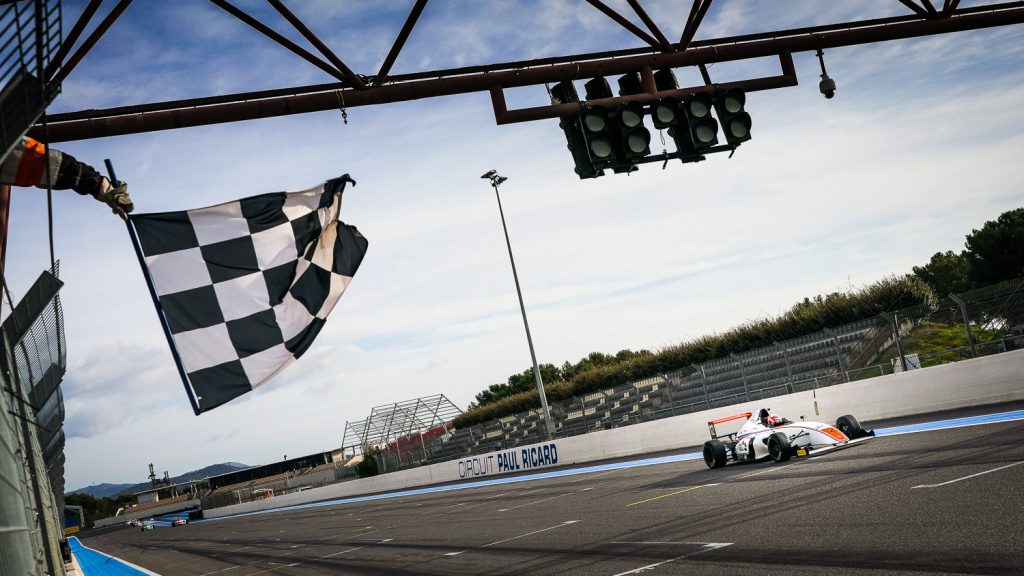 As is the case every year, the last meeting of the season always brings its share of surprises and confirmations. 2020 is no exception to the rule! Even if it is already a certainty that the talented Japanese driver Ayumu Iwasa will be crowned FIA French F4 Champion, many places of honour are still undecided. Moreover, Race 2 showed that all the drivers remain more than ever determined to give their best until the final chequered flag.

Isack Hadjar from start to finish

Omnipresent at the beginning of the day, the Provençal sun had difficulty hiding the sudden drop in temperature. But as soon as the lights went out, the temperature quickly went up again under the helmets of the academicians, especially that of Isack Hadjar who surprised the poleman Ayumu Iwasa. Just behind him, a superb duel between Ren Sato, Sami Meguetounif and Esteban Masson started. Valentino Catalano was also very incisive, while the positions at the back of the pack were changing all the time for the coveted 10th position, synonymous with pole position for Race 2.

At the front of the field, Iwasa was more and more in control of Hadjar and he also set the fastest lap. At mid-race, Meguetounif had definitively dropped Sato, who also had to surrender to the determination of Masson, excellent for his first single-seater race of the season. Although he was running in a solid 6th place, Romain Leroux suddenly had to drop out due to a problem with the gearbox selection. Catalano managed to overtake Rafael Villagomez to come back to 7th place behind Marijn Kremers.

More than ever motivated by the prospect of a win, Hadjar gave himself a little bit of space against Iwasa and took his third victory of the season. Meguetounif completed the podium in front of Masson who managed to increase the gap to the chasing pack. Within the pack, Kremers passed Sato at the end of the race to take 5th place. Between Villagomez and Loris Cabirou, the German Catalano took another victory in the Junior category. Tangavelou completed the top 10 after winning his duel with Daniel Ligier.

Loris Cabirou the eighth winner of the season

From the beginning of Race 2, Loris Cabirou got the better of Owen Tangavelou with strong determination. Once again, Valentino Catalano made a remarkable start and was soon in second position in front of Ren Sato. Tangavelou was overtaken by Villagomez and then Kremers. Esteban Masson also had some difficulties in keeping his position, while Isack Hadjar and Ayumu Iwasa were on the attack.

As the laps went on, Cabirou managed to keep a good rhythm and increased the gap to Catalano. Until the end, the driver from Alès was able to control his opponents perfectly and took his first victory of the season. After having got rid of Sato, Mexican driver Rafael Villagomez managed to overtake Catalano. The Richard Mille-Birel ART scholar took his best result of the season with this second place. In the middle of their ascent, Hadjar and Iwasa finally came up against Sato, who narrowly saved 4th place.

Unlucky in Race 1, Romain Leroux made a magnificent comeback from 14th to 7th place. Forced off the track during a hot lap, Marijn Kremers dropped from 4th to 8th position during the last lap. Tangavelou finished a little bit further back with some regrets, letting Daniel Ligier complete the top 10. There was disappointment for Sami Meguetounif, who was forced to retire.

Follow the last event of the French F4 Championship on the Facebook page of the FFSA Academy, Sunday 22nd November 2020 at 9.20 am.