An exciting protagonist of the 2019 French F4 Championship, the American Hays finally won his first victory! Hadjar came out victorious in a lively duel for 2nd place and Valente completed the podium of Race 3. The overall classification is still full of suspense. 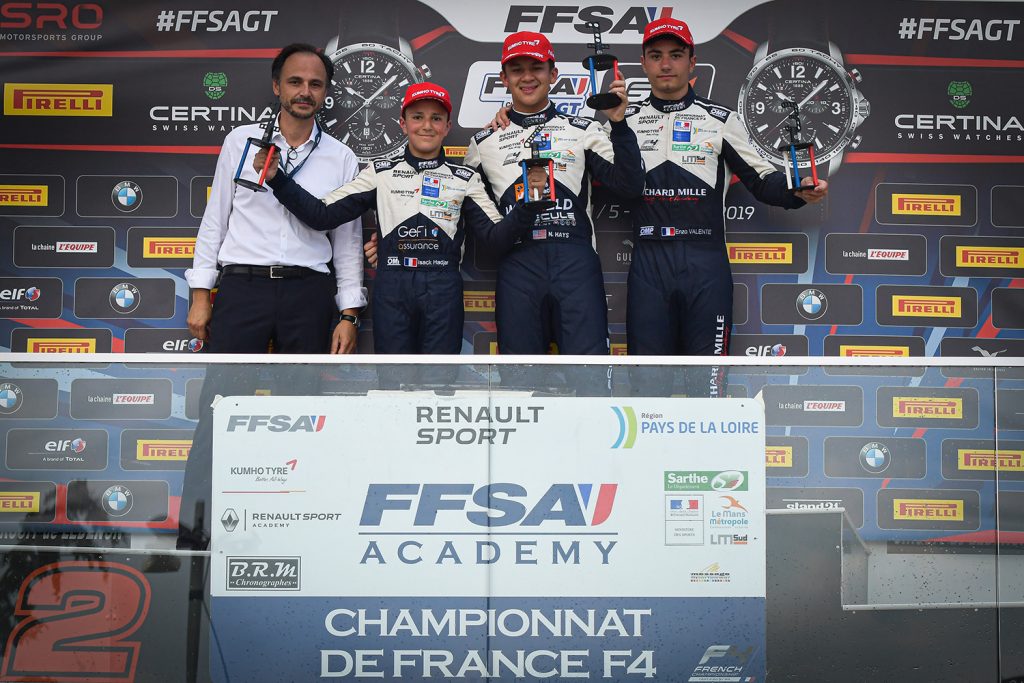 The fourth meting of the Championship season organised by the FFSA Academy ended with a particularly lively race at the front of the field. When the lights went out, Nicky Hays was the most incisive, starting from his 5th place on the grid. “At Lédenon, the first lap is very important and I was determined to gain as many places as possible,” commented the Californian. “Both on the inside and outside, I was able to pass three drivers and finish the first lap in 2nd place. I was stuck behind Hadrien David and found the opening a few bends later. I was very fast, which allowed me to win. The settings were perfect, I kept the tyres in good condition, and I set the fastest time of the race on the penultimate lap!“

Intense clashes for the podium

In the chasing pack, a breathless battle lasted almost the entire race between Hadrien David, Reshad De Gerus, Enzo Valente, Isack Hadjar and Victor Bernier. Far from being as comfortable as in Race 1 after which he had to mount a tyre from the previous race, Hadrien David was very quickly in trouble against Reshad De Gerus, his rival in the Championship. Although Hadrien tried to resist, the Reunion driver insisted and both cars ended up touching each other. De Gerus lost precious places in the fight and David was given a penalty (mandatory pass through the pits).

The race was no less intense, with fierce struggles between Valente and Hadjar as well as between De Gerus and Bernier. It was necessary to wait for the very last corner for two last overtakes which decided the hierarchy. “I am very happy with my race and 2nd place,” declared Isack Hadjar, visibly delighted with his performance. “Starting 7th, I really had to fight and pass several times to get this result. We worked well with the FFSA Academy and the set-up that we defined was perfectly adapted to the conditions of the track.” After his victory at Spa, Hadjar confirms his improvement and remains leader of the Juniors following this latest success in the category.

Suspense remains in the Championship

Although he mounted the third step of the podium, Enzo Valente regretted a problem with a wing support early in the race. “The car was really out of balance, I had a hard time holding it in the corners and when braking. I gave everything to stay ahead of Hadjar during the race, but the flapper began to move more and more, and at the end, I could not resist him. However, I scored a lot of points in the Championship, which allows me to stay in touch.” Hays, White, Henrion, Valente and Hadjar are now within less than 10 points overall between 3rd and 7th positions.

4th place went to Victor Bernier at the expense of Reshad De Gerus. “I was not sharp enough at the start of the race and I lost some places,” said Victor. “Then I had really good pace in the race and, by putting pressure on Reshad, I ended up passing him. As in Race 1, the podium was close, which is encouraging for the end of the season.” By taking the points for 5th place, De Gerus is only a few points behind David in the provisional ranking of the French Championship. Not far from the Reunion driver, Gillian Henrion was 6th ahead of South Africa’s Stuart White, Denmark’s Mikkel Grundtvvig and Jules Mettetal, the second fastest on the track.

The summer break has started for the Academicians and the last part of the season looks very exciting to watch, as recounted by Christophe Lollier, the National Technical Director.

“We have just celebrated the eighth different winner this season and we have witnessed successive victories for a Frenchman, a Dane and an American! Definitely, the 2019 vintage of this international level Championship is interesting and exciting. A lot can still happen at the Budapest and Magny-Cours races, which take place in September, one week apart. We can expect the title to be decided at the final round at Paul Ricard in October. The anticipation is high! I also want to highlight the performances of our Juniors. After Paul-Adrien Pallot’s victory at Spa, Isack Hadjar was again on the podium and Victor Bernier was very close on two occasions. This confirms the logic of the federal programme that we have set up to support kart drivers moving to cars.“

Provisional classification of the French F4 Championship after Lédenon (4/7)