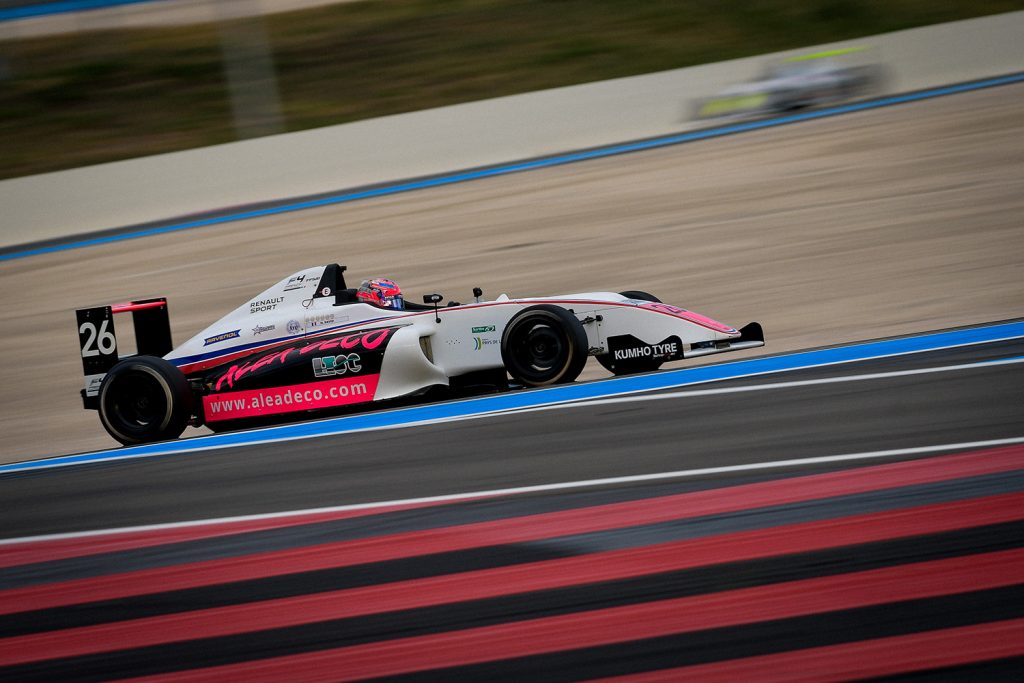 At Paul Ricard, Hadrien David could not dream of a more beautiful start. The leader of the French F4 Championship dominated the Qualifying session, securing a double pole position for Races 1 and 3 of the final and decisive meeting of 2019.

The long-awaited duel in Qualifying between the two contenders for the title did not take place! In difficulty throughout the 25 minutes of the timed session, Reshad De Gerus had to be content with a distant 17th time, far from his original goal. “It’s incomprehensible, as I set the fastest Free Practice time in the morning,” said the Reunion driver in desolation when he got out of the car. “We’re going to study the data acquisition to try to understand.” It’s true that De Gerus has not been used to such poor performance this season.

An advantage to be confirmed for Hadrien David

In contrast, Hadrien David was extremely satisfied with his 10th pole position of the year, which is also his fifth double pole! “I chose to start a few minutes after my rivals, to let them leave some rubber on the track and be sure to have a clear lap. Then I think that with Emeric, my engineer, we made the right choice of settings between Free and Qualifying Practice, especially with the aerodynamics. The car performed very well, with good top speed. Of course, everything will be decided during the weekend, and we must stay focused, but it is clearly an advantage to start from pole position.”

In Race 1 on Saturday morning, as on Sunday morning in Race 3, Hadrien David will share the front row with Victor Bernier, determined to move up again in the overall standings of the FFSA Academy Championship and to secure the French Junior Championship of 2019. “I was pretty confident after Free Practice, but it was still good to use the new tyres at the right time in Qualifying and I’m happy to have reached my goal.” Although Victor conceded only two tenths to the poleman, the other drivers were relegated by four tenths or more. Despite being in the top three, the American Nicky Hays was not fully satisfied with his performance. “I was really hoping to fight for pole position. The beginning of the session was positive, but I made some small mistakes when I needed to improve my times. However, I’m going to start 3rd in the two races, which is encouraging for this last race of the season.”

Behind Hays, 12 drivers are grouped together in less than five tenths! Very quickly on the pace in the Mediterranean sun, Ugo Gazil and Jules Mettetal were respectively 4th and 5th ahead of two new drivers recently arrived from karting, who celebrated their big debuts in single-seaters: Sami Meguetounif, top Frenchman in the OK World Championship, and Esteban Masson, recently crowned French Junior Champion. “It’s great to be so high up in Qualifying at our first meeting,” they said together. “Our goal is above all to learn the car and the Championship, without pressure, to prepare for the 2020 season.“

Gillian Henrion, Junior Isack Hadjar and Enzo Valente have completed the top ten, which will be the goal of many drivers in Race 1, in order to be able to start at the front in the second race. With 23 cars at the start, a show is promised at Le Castellet…

Estimated timetable of the weekend