A first for Leroux in Zandvoort, Iwasa repeats in race 3

In Zandvoort, the wet track of Race 2 spiced up the racing, which saw Leroux win for the first time this season. Starting 4th in Race 3, Iwasa won with panache, in addition to performing well in the French F4 Championship. 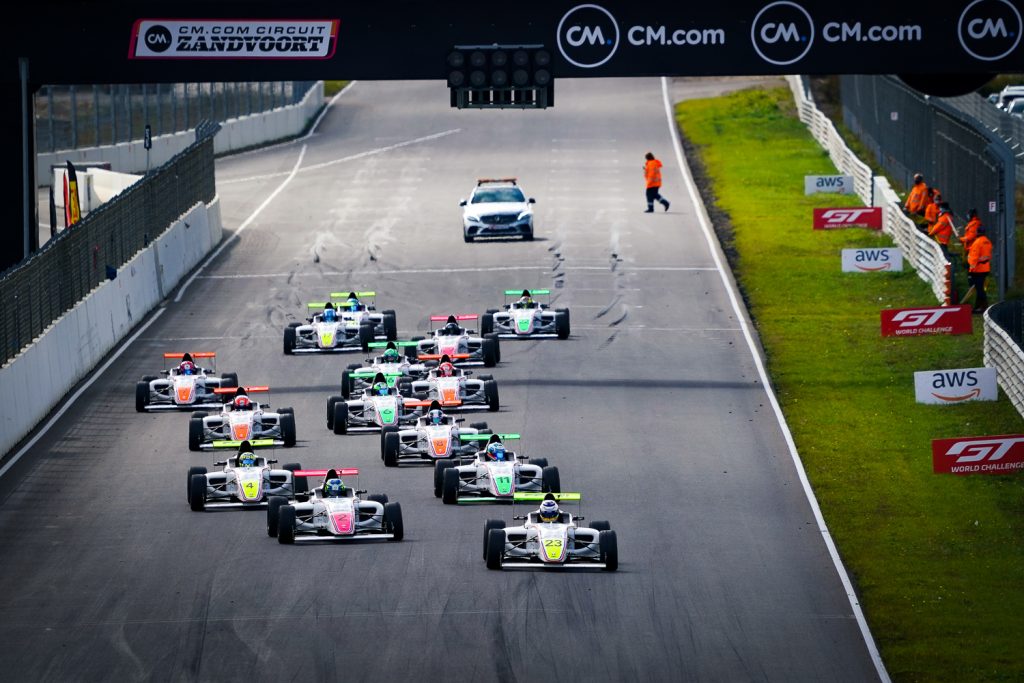 The Dutch weekend had its share of surprises, twists and turns, as well as confirmation. During this third meeting of the French FIA-F4 Championship, the academicians ensured excitement on the circuit of Zandvoort, recently renovated to welcome Formula 1. Rain tyres were out for Race 2 on Sunday morning, but the improvement of the weather conditions allowed the FFSA technical staff to equip the Mygale-Renault Sport single-seaters with Pirelli slick tyres.

Starting on pole position for Race 2, Romain Leroux exploited the track’s poor grip to take the Tarzan corner in the lead, while the highly inspired Ren Sato made an incredible start to move directly from 8th to 2nd place ahead of Ivan Peklin thanks to a daring racing line. Sami Meguetounif, who was stuck on the grid, started in last position. Isack Hadjar and Marijn Kremers started off well, chasing 4th-placed Valentino Catalano.

While Leroux was making a big difference against Sato, the chasing pack was full of overtaking and small mistakes. On this tricky track, Ukraine’s Peklin, Kremers from the Netherlands and Mexico’s Rafael Villagomez made successive mistakes.

Hadjar and Iwasa then climbed up in the hierarchy, before the safety car took to the track shortly before the finish after a collision between Peklin, Kremers and Daniel Ligier. The evacuation of the cars by the stewards took several minutes and the finish was behind the safety car. The Frenchman Romain Leroux was the logical winner, while his compatriot Hadjar took 2nd place at the last minute against Sato. The Japanese driver made the mistake of trying to go back to the pits, but then changed his mind and lost a place in the adventure. Iwasa was 4th in front of Catalano, the top Junior, Villagomez, Loris Cabirou and Lev Lomko, who took the last point distributed in this race.

A fourth victory for Iwasa

Judged responsible for the collision that marked the end of Race 2, Kremers lost the benefit of his pole position and had to start in 2nd position behind Ivan Peklin. But the Dutchman regained the lead shortly afterwards thanks to a nice pass. Things didn’t get any better for Peklin, who was overtaken by Iwasa and Catalano, then forced to retire by a puncture due to contact.

Decidedly not very successful in the Netherlands, Sami Meguetounif retired following an incident which led to the safety car going out. Kremers then saw his lead reduced to zero. Quickly put under pressure by the pack, the Dutchman yielded to Ayumu Iwasa. The Japanese driver extended the gap, set his third fastest lap of the meeting and won by a large margin. Kremers then had to work hard to hold on to 2nd place against Germany’s Valentino Catalano and France’s Isack Hadjar, who were locked in battle until the chequered flag was lowered.

Leroux made a final outside pass on Villagomez to move up to 5th place, with the opportunist Sato in his wake. Loris Cabirou finished just behind in 8th place, with Owen Tangavelou just a few lengths behind. Russia’s Lev Lomko rounded out the top 10 ahead of Daniel Ligier and Noah Andy.

Provisional ranking of the French Championship after Zandvoort (3/7)