Competitive throughout the weekend, Masson added another victory to his tally after dominating Race 3. At Magny-Cours, the duels were frequent in the chasing pack, from which Barter emerged in 2nd position ahead of Capietto. 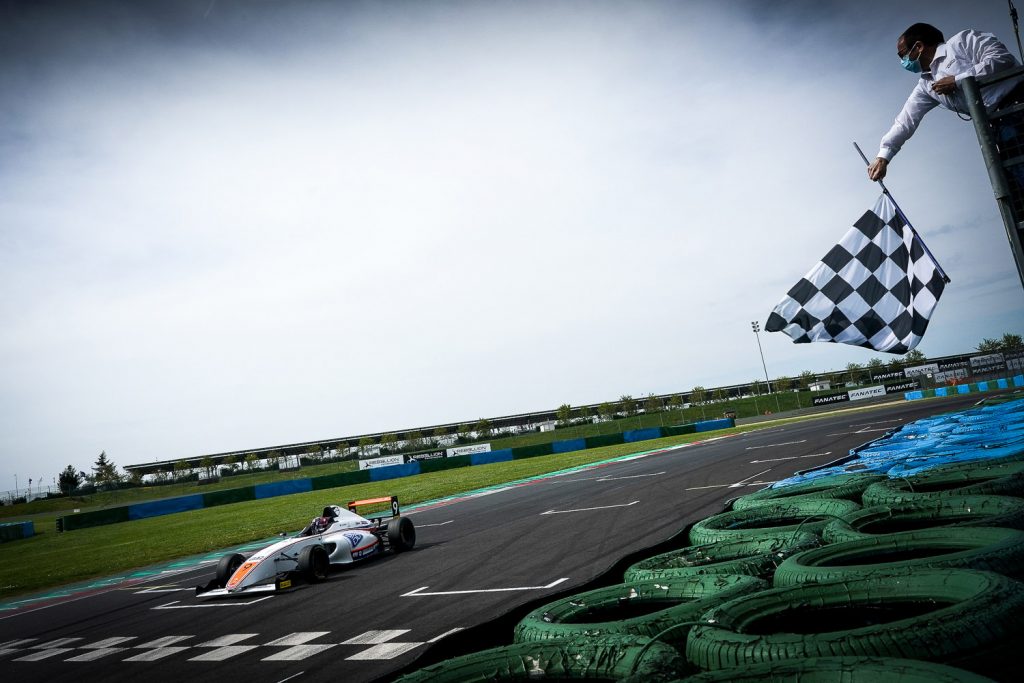 With two victories and a 4th place in Magny-Cours, Esteban Masson has managed to increase his lead in the provisional standings of the 2021 French F4 Championship after the first two races. However, the competition continues to be tight with incessant battles at all levels of the field. The intensity of the duel between Alessandro Giusti and Swiss driver Dario Cabanelas for the victory in the Junior category in Race 3 confirmed the interest of the FFSA Academy Championship.

Esteban Masson from start to finish

Disappointed at not having been able to follow up on his pole position in Race 1, Esteban Masson had a trouble-free race this time. As he got out of the car, the driver from the Pays de la Loire region welcomed his third victory with humility. “Winning at this level is never easy. Every moment was important. Getting off to a good start was essential, as was opening up a gap quickly to protect myself from any attack. The Magny-Cours circuit was less aggressive on tyres than Nogaro and I was able to manage the end of the race calmly.” Esteban took the chequered flag with a lead of around six seconds!

2nd on the grid, Owen Tangavelou quickly felt the pressure of a trio composed of Hugh Barter, Macéo Capietto and Daniel Ligier, who had got rid of Alessandro Giusti from the start. Barter eventually found the opening and gave his opponents the slip. “To be on the second step of the podium after a start in 4th position is still an excellent performance. I was fast until the end and I managed to take the fastest lap point at the end of the race. The Championship is long and I am still optimistic for the rest of the season.”

Intense duels in the top five

By putting pressure on Tangavelou, Capietto pushed his rival to cut the lycée chicane. Owen was given a five-second penalty which let Capietto take the podium. Buoyed by his podium in Race 2, Noah Andy drove a magnificent attacking race and had just overtaken Daniel Ligier for 5th place, when he made a small mistake that dropped him back to 8th position.

Other close battles spiced up the race. Gaël Julien, Alessandro Giusti and Dario Cabanelas overtook each other incessantly, demonstrating once again the great sporting equality of the French F4 Championship, where each driver has to make the most of his Pirelli tyres and his Mygale single-seater with a turbo engine developed by Renault Sport. A small touch prevented Julien from taking part in the final battle, which saw Giusti surprise his Swiss rival one last time during the last lap of the race. This occasion decided the victory in the Junior class!

Just behind, Pierre-Alexandre Provost, the Polish driver Adam Szydlowski and Enzo Geraci didn’t do each other any more favours! Szydlowski did the best and emerged in 9th position in front of Provost. Geraci was demoted following a penalty, leaving the Indian driver Vignesh Kadarabad to finish 11th ahead of the Briton Aiden Neate, who was decidedly unlucky at Magny-Cours, and Angelina Favario.